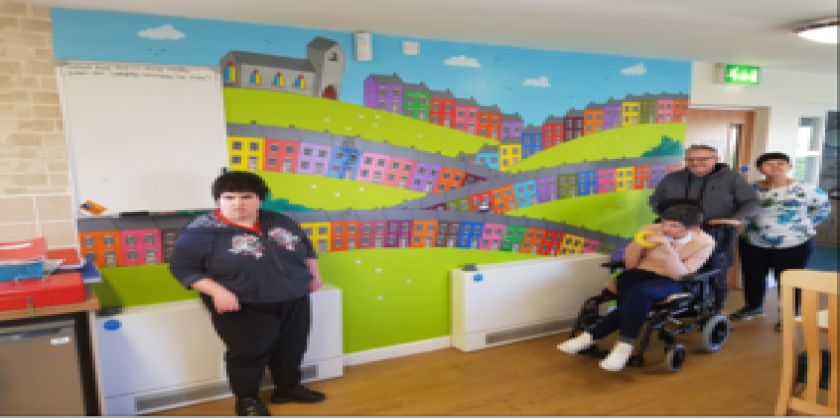 Who knew we had a budding Picasso among us? CSO Jeff Dugmore, who works at Blackwood Station, has been spending his free time over the last few months, painting a mural on the wall at the Markham Resource centre. The large, brightly coloured creation is all from his imagination and has already proved a hit with the day visitors to the centre.

The resource centre in Markham used to be the Police House in the village and was purchased by Caerphilly County Borough Council in 2013. The building has since been converted and now provides day opportunities for people with learning disabilities. The people who access Markham are involved in activities within the local community including craft classes, archery and community education. There is a sensory garden in the grounds, which is maintained and used by members of the community, including the local primary school.

Jeff, who enjoys painting as a hobby, regularly attends the centre when he is patrolling on his ward. Talking about his style and inspiration, Jeff explained: “I have been painting in my spare time for the past five years and my paintings mostly depict typical valleys scenes incorporating coal mines and churches or coastal scenes, all with plenty of colour to give them a lift!”

The staff at the centre asked Jeff to paint the mural after they loved a painting he had previously given them for inside the centre. He continued: “The images in the mural are not of any place in particular, I just draw the designs randomly. The staff asked for a big, brightly coloured painted mural for the wall as the bright colours are stimulating. It has taken several months and many hours to complete, but the staff and individuals were very thankful.”

It seems this is just the beginning of Jeff’s artistic career. Having seen the impact his wonderful work has had on the visitors to the Markham centre, he has been approached by Caerphilly County Borough Council to consider another project. The Manager of Markham Community House and Sports Centre and the local councillor for Argoed ward would like him to paint another mural on the wall at the Community House, involving the help of local schoolchildren.

Let us hope he doesn’t hang up his uniform to become the next Banksy anytime soon.