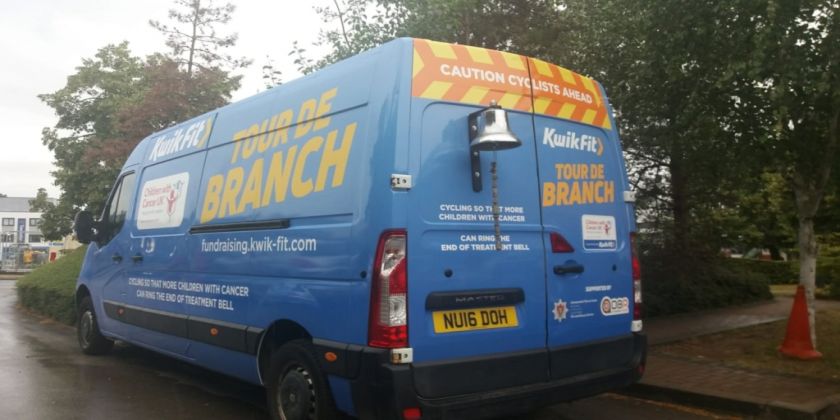 A bell which has helped saved many lives in South Wales over the years is being taken on a national tour with the aim of saving many more in the future. The station bell from Cardiff Central Fire and Rescue Station has previously been used to alert firefighters to emergencies and has since been replaced by an electronic system. However, the hand-rung bell was retained for ceremonial purposes.

Now the bell has been lent to a national charity cycle challenge which aims to help children with cancer ring their own ‘end of treatment’ bell – a personal ceremony to mark the point at which they are clear of the disease. Kwik Fit employees across the country are swapping cars for bikes in their Tour de Branch – a national tour to raise vital funds for Children with Cancer UK, a charity whose mission is to help every child diagnosed with cancer ring their end of treatment bell.

The fire service bell will be mounted on the team’s support vehicle and rung to mark the start of each leg of the Tour de Branch, which is seeing more than 80 cyclists take on a journey which connects 122 Kwik Fit centres from Scotland to Cornwall. The journey begins in Aberdeen on Monday 19th August and ends a month later in Manchester having covered more than 2,500 miles, some 300 miles more than this year’s Tour de France.

The Kwik Fit team will pass through Cardiff on 12 September during their South Wales leg of the journey and will be stopping off at the Cardiff Central Fire and Rescue Station to thank the firefighters there for their support and the loan of the bell, which will help to provide the riders with inspiration when the going gets tough.

South Wales Fire and Rescue Service, Station Commander for Cardiff Central, Gareth Llewellyn said: “As a Service we would like to wish Kwik-Fit all the very best with their fundraising efforts, enabling more children to ring the ‘end of treatment’ bell. We hope that the bell, once mounted on the back of the lead vehicle will help to motivate and support the riders in their challenge.”

Operations Manager South West and Central Kwik-Fit Dave Rees said: “It’s amazing to get the support of South Wales Fire and Rescue Service, we’re privileged to borrow the bell to motivate the riders and remind them of what the bell symbolises. We look forward to returning it when we have successfully completed our challenge with the bell having played a role in saving even more lives.” 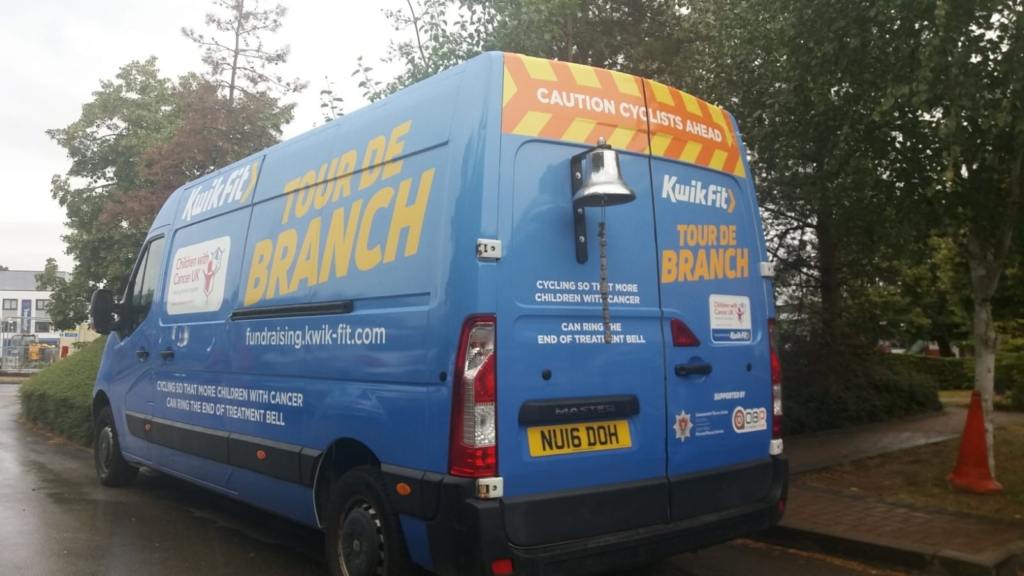 The employees of the UK’s largest automotive servicing and repair company selected Children with Cancer UK to be its charity partner for 2019 and are aiming to raise £1million throughout the year. These funds will go towards supporting families facing childhood cancer as well as research into ways to prevent cancer in future generations of children.

To also help inspire the team as they take on the hard miles, the riders will also be meeting with children and families who have experienced the devastation of a cancer diagnosis and who have come through to ring the bell to mark the end of their treatment. Their stories will bring home the importance of the fundraising the team are carrying out.

Kwik Fit has been running a host of fundraising activities to support the charity’s work throughout the year and more is to come, including mass participation by staff in the Simplyhealth Great North Run.

Anyone wishing to donate can do so very easily by texting KWIK3 to 70007 to donate £3* or by visiting the fundraising webpage for more details.

Details of the ongoing fundraising programme will be shared via social media, with customers able to follow the company on Twitter at @kwik_fit.