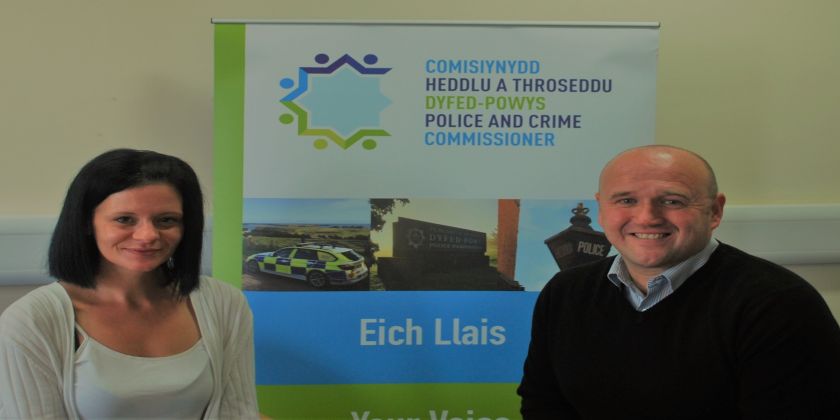 A new initiative was launched on the 1st November which will aim to divert low level offenders away from the criminal justice system and reduce reoffending in the Dyfed-Powys Police force area.

The Diversion Scheme will enable eligible offenders to get the support and guidance they need to keep out of the criminal justice system. Only individuals who have committed a low level offence which is eligible for an out-of-court disposal will be accepted on to the scheme. Individuals identified as the highest risk of offending will be excluded from the scheme and will be dealt with via traditional criminal justice disposals.

A successful pilot of the scheme began in 2016 as a Women’s Pathfinder in Pembrokeshire. The pilot was widened in 2018 to a diversionary scheme for all eligible offenders in Pembrokeshire with an aim of providing a force-wide scheme.

“I’m pleased to be in a position to see the new Diversionary scheme come to fruition in the force. This is a significant development from our initial pilot that focussed mainly on women offenders. Critically what it does is give people a second chance. When people come in to the criminal justice system, this is an opportunity for them to go through a diversionary scheme which will work with them as a person, trying to understand the reasons behind their offending and providing them with the appropriate help. Evidence shows that this approach leads to reductions in reoffending. By reducing the offending we obviously reduce the number of victims in the force area and that can only be a good thing for our communities.”

“I am looking forward to working with Pobl Care & Support who have been awarded the contract to provide the essential support and guidance to offenders within the Diversionary scheme.”

As part of the Pobl Group, Pobl Care & Support is a leading provider of care and support services to people living in Wales and the South West of England, specifically aimed at improving lives and enabling independence.

“From a provider’s perspective it’s a privilege to deliver such a culture and game changing initiative. Having worked on the pilot project we know this is a scheme that is evidenced to reduce demands on other services, impact positively on those who engage in the targeted programme of interventions and make our communities safer by reducing re-offending.”

“This initiative seeks to tackle the root cause of offending and associated health and community related issues. The multi-agency approach will seek to address offending behaviour at a much earlier stage in a person’s offending journey and improve awareness of and access to support services for eligible offenders committing low level offences.”

“I recently spoke to Maria Hardwick who, like many people, went through a very difficult time in her life. After coming into contact with the police she was offered, and benefited greatly from being on, the Women’s pathfinder pilot in Pembrokeshire. I would like to thank Maria for being brave and willing to speak publically about her experience.”

Speaking about her experience on the scheme Maria said

“….it was a much needed intervention for me…” ……“I felt very supported, there was no judgement at all, no assumptions, so yes, a very valuable experience for me”……. “I’d highly recommend Pathfinders, if I can change so can anyone.”

Click on video to hear PCC Llywelyn talk about the scheme and to listen to Maria’s story.

“This initiative will provide tailored support and intervention to those accepted onto the scheme at the earliest opportunity.  Many low level offenders, like Maria, may possibly be victims themselves and the support they will receive will hopefully help them address underlying issues, build positive relationships and reduce re-offending across Dyfed-Powys.