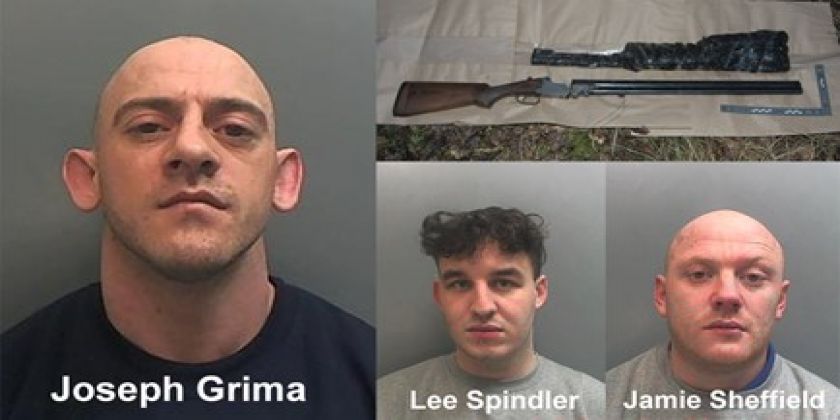 A robber who threatened a man with a gun and machete in Macclesfield has been given life imprisonment.

Two other men have also been sentenced to a total of 22 years in prison.

Joseph Grima, of Water Street in Macclesfield, will serve a minimum of 10 years after he was found guilty of robbery, possessing an imitation firearm and witness intimidation at Chester Crown Court on Friday 16 August.

Lee Spindler, 26, of no fixed address was sentenced to nine years and eight months after pleading guilty to possessing an imitation firearm and robbery.

Jamie Sheffield, 33, of Eldon Place in Eccles was sentenced to 12 years and nine months after pleading guilty to possessing an imitation firearm and robbery at Chester Crown Court on 4 September 2018.

On the evening of 10 January 2018 the victim was asleep in bed when he heard Spindler, Sheffield and Grima coming up the stairs of his house in Over Alderley.

When the 25-year-old opened his eyes he saw one of them holding a large black machete directly onto his cheek and another man holding a gun to his head.

The men then shouted ‘where are the guns?’ while holding the gun to his face – the court heard how it is unclear if the gun was real or an imitation.

The men tied up the victim and made an untidy search of the house before leaving with two shotguns and two rifles as well as stealing a cannabis plant, collector’s coins and a mobile phone.

After the armed men left the scene in two separate vehicles in the early hours of 11 January 2018, the owner alerted police to what had happened.

Police quickly identified one of the getaway vehicles as a Nissan Qashqai and at 5am on 11 January 2018 it was seen by officers who followed it out of the Macclesfield area before stopping it in Salford.

Armed officers arrested Spindler in the front passenger seat but Sheffield fled from the scene and was later arrested at a house nearby.

Officers found the shotguns on Turf Lane with Grima’s DNA discovered on all of the stolen weapons and the knot of a bin bag where the guns were placed into.

Two weeks later Grima was arrested on 25 January 2018 at his home and his mobile phone was seized by police. The court heard how his device proved to be a significant and important piece of evidence in proving he was involved in the robbery.

Detective Sergeant Simon Mills, of Macclesfield CID, said: “These men broke into the victim’s house in the middle of the night with the intention of terrifying him. They held weapons to his face and subjected him to threats which left him with no choice but to give into their demands. Throughout the incident the victim was left in fear of what the gang would do to him to the point he feared if he would survive.

“This was a pre-planned robbery using weapons – namely a handgun, machetes and knives and it was intended to instill the utmost fear in the victim or anybody who got in their way.

“Grima has shown no regard for the court process, victims or justice throughout the investigation. He intentionally tried to prevent his trial going ahead by threatening prosecution witnesses and has today seen justice served where he will pay the price for his own actions.

“Grima is a dangerous individual who as we heard in the trial has previous convictions for like offences – it is clear he had not learnt from his previous offending and he fully deserves his lengthy time in prison.

The sentences handed out today send out a clear message that with this level of criminality come costly and impactive sentences to all of those involved.”

All three men were sentenced at Chester Crown Court on Friday 8 November.