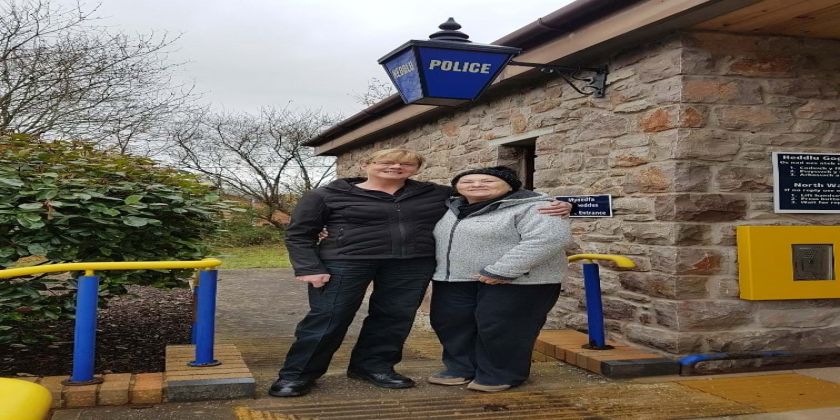 An off-duty police officer has been praised for saving the life of a woman who was choking.

Sergeant Fiona Armstrong-Brown was in the process of ordering dinner for her and her mother at the New Inn in Dyserth when she noticed a woman choking on a neighbouring table.

Maria Leach from Kinmel Bay was out having a family meal when she began to choke on her food.

Her husband Dennis said: “We unsuccessfully attempted to dislodge the offending food by patting her back and doing the Heimlich manoeuvre. By this time my wife was struggling to breath and we were all panicking.”

Fiona calmly walked over, took hold of Maria and continued with the Heimlich manoeuvre until the piece of meat was ejected and her airway was cleared.

“When I went across to help she had gone limp and they were shouting for an ambulance. I recognised that this was a serious situation and immediately put my first aid training into practice,” said Fiona.

“I joined the police to save lives, but this is the first time that I have directly saved someone’s life. It highlights that even though officers may not be on duty in uniform we are out there, part of the community,” she added proudly.

Mr and Mrs Leach were so appreciative that they made a special visit to Denbigh Police Station on Monday to personally thank Fiona for her prompt actions.

Dennis said: “On behalf of my wife, children and grandchildren we cannot thank this lady enough. This officer saved my wife's life.”

District Inspector Andrew Kirkham commented: “I am very proud that Fiona was able to put her training into practice to save someone’s life. It is really great to hear that she jumped in and helped in such a way.”