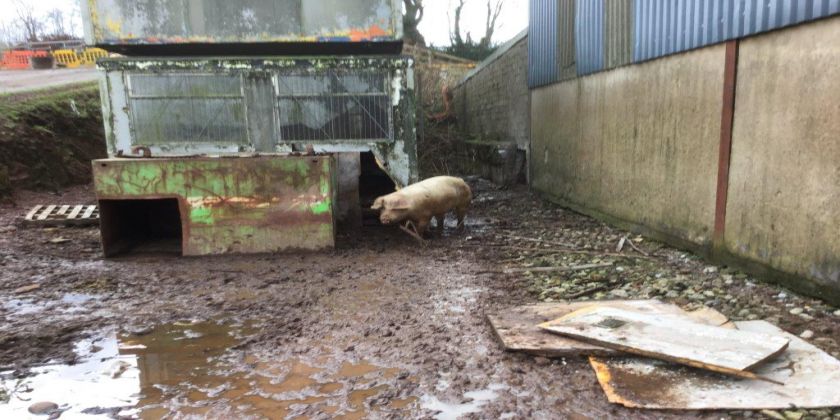 Both parties were charged with several offences namely:

While Burns had entered not guilty pleas to all charges, Clayton had pleaded not guilty to operating an illegal slaughterhouse and to the associated hygiene-related offences. He admitted his involvement in producing and placing unsafe food (‘smokies’) on the market and the animal by-product offences.

On Monday (10th February) both Burns and Clayton were convicted on all counts. Sentencing is to take place on 13th February.

A third defendant, Kenneth Darren Evans of Carmarthen, entered guilty pleas on the second day of the trial, for his part in producing and placing unsafe food (‘smokies’) on the market and of the animal by-product offence.

On arriving at the site officers were appalled to discover an illegal slaughter operation underway in one of the agricultural outbuildings, with Clayton and Evans caught in the act.

The unit had been set up as a makeshift slaughter hall with six slaughtered sheep at various stages of preparation and further penned sheep awaiting the same fate.

A herd of pigs were seen wandering among suspended sheep carcases, feeding on the remains of the slaughtered animals.

Approximately six further carcases of smoked sheep were found bagged in the boot of Evan’s car, ready for onward supply.

Evidence was gathered by officers and the carcases were seized for condemnation.

Due to concerns regarding the welfare of the livestock on site, assistance was sought from Animal and Plant Health Agency veterinarians as well as from a local veterinary practice.

A number of sheep were subsequently euthanized for humane reasons and restrictions were placed on the herd of pigs, preventing their movement off-site to address the potential disease risk and to protect the human food chain.

At the conclusion of the trial, all three defendants were released on unconditional bail, pending the production of pre-sentence reports and sentencing.

The Swansea Crown Court trial followed an associated prosecution case brought against Burns which arose from further offences committed on 21st January 2019, for operating an unlicensed dog breeding establishment together with 13 further animal welfare charges that were identified at that time.

This case was heard by District Judge Chris James in Swansea Magistrates Court.

On 19thSeptember, 2019, Burns had pleaded guilty to all 13 animal welfare charges, but not guilty to the further charge of operating an unlicensed dog breeding establishment.

A court case subsequently took place on the 29th and 30th January, 2020, when Burns was found guilty of all offences.

The hearing heard how on 21stJanuary, 2019, officers had identified in excess of 40 dogs divided between a substantial kennel facility - developed in one of the agricultural outbuildings – and, to a lesser extent, Burns’ residence. There was evidence of dogs being moved between the two.

Aside from not having a licence, the court heard how the condition of the kennel facilities and level of care afforded to the dogs fell well short of prescribed standards, leading to animal welfare being compromised.

In light of the welfare concerns affecting a range of livestock on site, plus dogs and horses, the County Council’s Animal Health and Welfare Team supported by various other agencies carried out a follow-up operation over the 29th and 30th January, 2019, taking possession of over 200 animals from the site.

Following an application to the Magistrates’ Court, these animals were subsequently subject to rehoming or, in the case of the sheep and goats, sold.

Speaking after the Swansea Crown Court trial, Pembrokeshire County Council’s Cabinet Member for Environment, Public Protection and Welsh Language, Cris Tomos, said that he was “extremely pleased” with the verdicts.

“The extent of the offending discovered by Council officers when they visited the site in January, 2019, surpassed anything they had encountered at any time during their careers” said Councillor Tomos.

“The individuals involved had clearly sought to profit from these unlawful activities in which they displayed a complete lack of regard for the welfare of animals and for the safety of consumers who might ultimately have purchased the illicit smokies.

“The consumers would have had no comprehension of the conditions in which the animals had been held, slaughtered and processed, or of the potential health risks. The same would be said for anyone purchasing any puppies bred on site.”

Councillor Tomos advised that any members of the public interested in acquiring such animals are encouraged to seek as much information as possible on the vendor, including where and how the dogs have been bred, and whether the establishment might require and if so be licensed.

“This will help to ensure that dogs are not being sold by unscrupulous individuals, looking to profit at the expense of animal health and welfare” he explained.

Councillor Tomos added: “We await the forthcoming sentencing hearings with interest and hope that the courts send a clear message to would-be offenders that such crimes do not pay.”