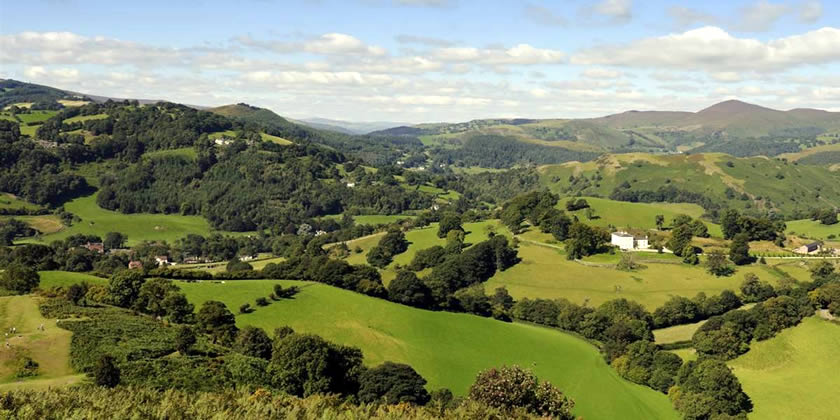 Today, February 14, 2020, at what will become the site of the Urdd Eisteddfod Denbighshire 2020 on Kilford Farm, Denbigh, a turf-cutting event was held to mark a hundred days to go until the national festival. The Urdd Eisteddfod, the biggest festival of its kind in Europe, attracts up to 90,000 competitors, supporters and visitors every year and the same numbers are expected to make their way to Denbighshire this year.

The Eisteddfod itself will be held on May 25-30. The Youth Show will be on May 23, the official Eisteddfod Opening Concert on May 24 and the Primary Show on May 26. The stage shows, featuring children and young people from all over the county, are original shows written by two well-known names in Denbighshire, Mali Williams and Angharad Llwyd Beech.

Tickets for the stage shows go on sale today (February 14) on the Urdd website urdd.cymru or by calling 0845 257 1639. Additional performances of the Youth Show, held at Theatr Elwy, Ysgol Glan Clwyd, St Asaph, will be held on May 2nd and 3rd as well as the performance on the 23rd.

The Eisteddfod week itself will see 15,000 children and young people taking part in competitions ranging from singing, acting and dance to art, cooking and creating apps. As well as the competing, there will be activities such as sports sessions, a climbing wall, children’s shows, live music and more than 80 stalls on the Maes.

“The Eisteddfod last visited Denbighshire in 2006 when it was held on land at Ysgol Brynhyfryd.

“That Eisteddfod was a tremendous success and provided a great opportunity for children and young people to benefit from Wales’ largest youth festival, as will this year’s Eisteddfod. There was a lot of enthusiasm locally, with communities working together to raise funds and to arrange a wide range of events to promote the Welsh Language and culture locally.

“The support for this year’s event has been tremendous and we are looking forward to continue working with the Urdd over the coming months to make 2020’s Eisteddfod one to remember. We’re also looking forward to welcoming Wales to Denbighshire.”

“After two slightly different Eisteddfodau, one at the Royal Welsh Showground in Builth Wells and a city Eisteddfod in Cardiff last year, the Eisteddfod returns to a more traditional Maes, on farming land with the Clwydian Range as a stunning backdrop.

“There’s much anticipation and a lot of preparation and it’s great g to see how much incredible work is going on across the whole county. Committees, schools, clubs and organisations have been and are continuing to work hard to ensure that the Denbighshire Eisteddfod is an eisteddfod to remember!”

Local school pupils from Frongoch Primary, Denbigh High and Plas Brondyffryn School joined officials from Denbighshire County Council and the Eisteddfod to cut the turf. In the evening, S4C’s Heno programme featured interviews and a performance by Ysgol Pen Barras Choir, live from Denbigh Library, which changed its outside lights to red, white and green to reflect the colours of the Urdd. Other locations in the county will also be lit in red, white and green as the big week approaches.