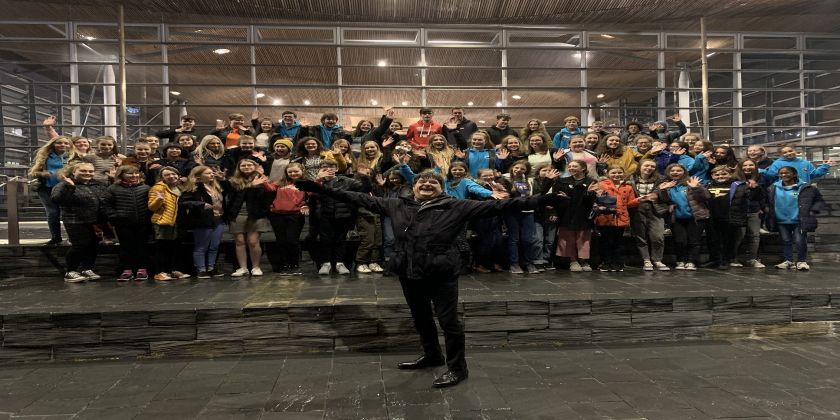 The musicians, who all attend weekly County Music ensembles, had the privilege of working with professional tutors Roger Clarkson and Chris Vale at the Urdd Centre.

Former Welsh National Opera bassoonist Chris Vale, who conducted the woodwind section, said it was ‘good to see music being played at this standard by such young musicians’.

“I really enjoyed my weekend with the wind players of Pembrokeshire’s music service,” he said. “They were exciting to conduct and worked very hard. The results were fantastic. They are a credit to their music teachers.”

The ensembles’ rehearsals culminated in performances to each other on the Sunday morning before travelling home. The Strings performed Palladio by Karl Jenkins and Arrival of the Queen of Sheba by Handel among other pieces, while the Woodwind performed the Game of Thrones theme and highlights from ‘My Fair Lady’ by Frederick Loewe, and other items.

The young musicians also enjoyed a concert by the BBC National Orchestra of Wales at Brangwyn Hall, Swansea entitled ‘Jazzical Tales’ and were delighted when the Orchestra’s associate leader Nick Whiting chatted to them before the concert, having recognised them from their rehearsals with BBC NOW over the past year.

The music weekend was organised by the Pembrokeshire Music Service and supported by Valero.

“It was fantastic to offer these young, enthusiastic musicians the opportunity to see and listen to professional orchestras and experience working with professional tutors,” said Philippa Roberts, music coordinator for the Music Service.

“Pembrokeshire Music Service would like to thank Valero for their continued support and sponsorship of events such as these.”

Pictured are the young musicians at Cardiff with Roger Clarkson.