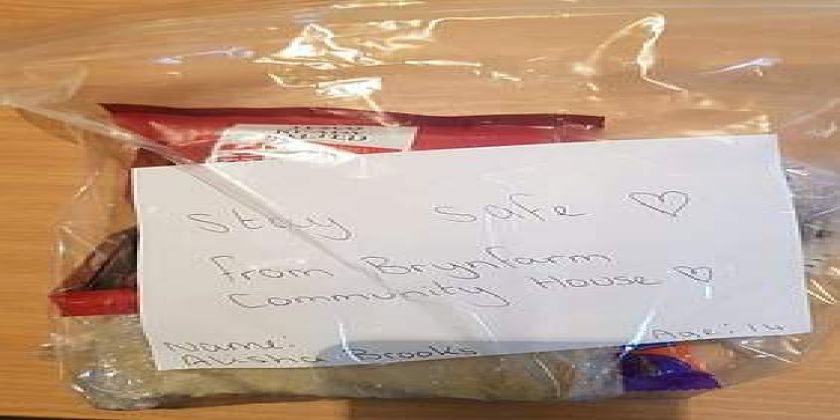 A local group of ten children from Brynmawr and Coed Cae Rotary Interact have today (Friday 21st February) recorded a song as part of an ongoing project to help raise funds for homeless people.

The Brynmawr Rotary Interact Group, who meet weekly at the Tai Calon Community House on a Brynmawr housing estate, have been working with local Gwent Police Community Support Officer Linzi Nicholls. The project started last summer with the children organising a raffle to raise money to buy food for packed lunches for homeless people.

Community Support Officer Linzi Nicholls explained, “During one of our meetings, I spoke to the young people about what it meant to be homeless, and we discussed the circumstances around what can lead someone to be homeless. The young people wanted to raise money to help, and decided to make food parcels which I agreed was a lovely idea.

‘We spoke about health and safety and food preparation before the children made up packs of food for each person. The children also included notes with each pack, writing words of encouragement and decorating  the food bags to show they cared.

“The children have now been making food packs every week in all weathers, even over Christmas. During the Christmas holidays, four children went to Newport to meet with Spectrum Homeless Project, and some of the homeless people their food parcels were going to. This gave the young people the opportunity to hear first-hand, some of the background and circumstances that led the people they met to become homeless. This had a huge impact on the group who then came back to Brynmawr to educate their friends and the meeting has really given them the incentive to continue with their project.”

“Unfortunately, despite the support of local businesses and the community, the money raised by raffles is starting to run out which is why we started the project to record a song.”

CSO Linzi Nicholls wrote the lyrics for the song “I Can Achieve” and local poet Richard Hool wrote the melody.

The young people from  Brynmawr and Coed Cae Rotary Interact group have this week taken part in a half term project at local radio station BGfm thanks to funding from the Gwent Police and Crime Commissioner. The group learnt how to produce a radio show including sound, media and interviewing skills as well as practicing for the debut airing of the song.

Members of the group Alisha White, Amber Healey, Darcy Ali, and Jayden Healey have today performed the song live on air along with volunteer musicians from BGfm. All other members of the youth groups have been involved in the production of the recording.

Gwent Police Chief Constable Pam Kelly said: “These young people have worked so hard on this project and the commitment they show every week in making these food parcels for the homeless really is amazing.

"The words of the song have been written by our Community Support Officer Linzi Nicholls and I’m so proud of the work she does along with the rest of the policing team in Brynmawr. Linzi dedicates her time, not only in a work capacity, but also by volunteering during her time off which is inspiring. Congratulations to everyone involved, these young people really are a credit to their families and their community as a whole."

Rotary GBI President Donna Wallbank added: ‘Hearing the song performed today has moved me to tears. I’m incredibly proud of our Interact clubs in Coed Cae and Brynmawr and the work they do to help others is fantastic.  These young people have worked together to achieve so much as one – a group of young people who want to show the positive change they can make. I’d extend a welcome to any young people who want to join our groups and more information can be found on our Facebook page.

Rhiannon Brown, founder of Spectrum Homeless Project said, “We are humbled and very grateful to all the children, for the amount of effort and time spent producing their song, and their continual support of the homeless. Our project relies on donations and we’re so grateful for any support. For more information, visit out Facebook page.”

If anyone would like a copy of the song, a recording will be sent to each person who donates via: www.justgiving.com/crowdfunding/InteractSings

If you donate, please send a message to the Interact Sings Facebook page leaving your contact details for us to send you the song.

If you’d like to find out more information about Rotary and Interact opportunities for young people, please visit: www.rotarygbi.org/projects/young-people/interact/