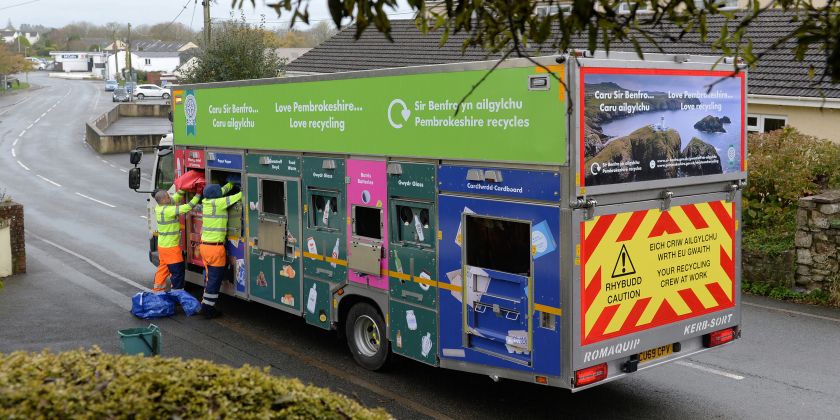 Pembrokeshire’s recycling performance is among the highest in the country, provisional new figures have indicated.

The provisional figures show that recent waste and recycling changes have resulted in Pembrokeshire’s recycling figures increasing to 70.3% for the year to date (April 2019 to end of December 2019) – compared to 60.6% at the same time the previous year.

Even higher are the provisional figures for October to December 2019 – the period when major changes to the county’s kerbside collections were introduced.

During these three months, Pembrokeshire recycled 72.66% of its waste, compared to 60.67% during the same period the previous year.

Other waste and recycling changes include intervention policies at Waste and Recycling Centres and the introduction of the Absorbent Hygiene Product (AHP) collections.

Cllr Cris Tomos, Pembrokeshire’s Cabinet Member for the Environment, Public Protection and the Welsh Language, said the provisional figures were an ‘amazing achievement’.

“Based on these figures, Pembrokeshire has the highest recycling performance in the whole of Wales, which in itself has the third best recycling level in the world,” he said.

“Huge thanks must go to all concerned including our residents for embracing the changes, which we fully acknowledge did cause some difficulties and challenges for many.

“We are also very grateful to our staff across the organisation who have been fantastic, and members for their ongoing support.”

The provisional figures have been produced by the County Council and submitted to the Welsh Government for audit.