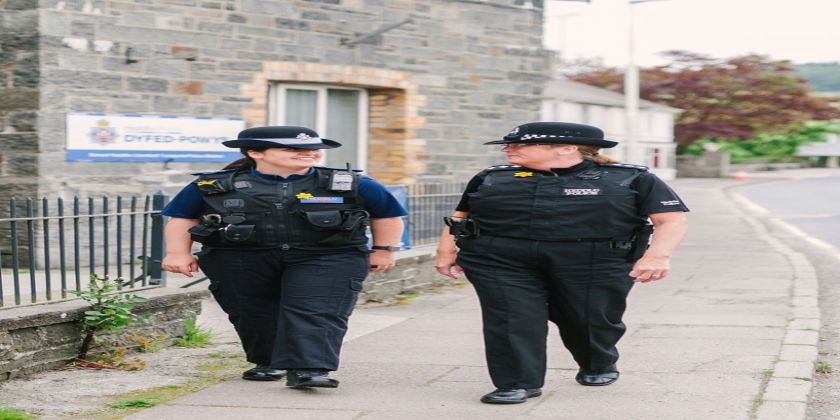 AS Chief Inspector Nicky Carter ended a 30 year career in policing, there was no better way to do it than going out on patrol with her daughter.

And for PCSO Charlotte, taking to the streets of Lampeter with her mum was a fitting way to mark her first six months at Dyfed-Powys Police.

Patrolling together in uniform was something the mother-daughter pair had long imagined, with PCSO Carter wanting to join the police from a young age.

The 19-year-old said: “I joined in September 2019, and have wanted to be a part of Dyfed-Powys Police since I can remember. I was inspired by my mum working in the force, and thought it would be a great career.

“I’m really glad I joined before she retired, as it gave us the opportunity to go out on foot patrol in the town where mum had been the local Inspector. It was really lovely.”

Embarking on a career she’d planned since childhood, PCSO Carter took the chance to gain valuable advice from her mum – whose experiences on the frontline inspired her to join.

“Mum has told me to always treat people as I would wish to be treated,” she said. “That’s something I’ll take forward with me.”

“I’m six months in now, and I enjoy dealing with the public and offering reassurance to people in the communities of Lampeter town and surrounding areas.”

For former CI Carter, the foot patrol drew a 30-year career – starting at North Wales Police – to a poignant close.

She ended her time at Dyfed-Powys Police in her home division of Ceredigion, transferring to Aberystwyth in 2006 to take up an inspector post.

Despite admitting there will be concerns for her only child as policing inevitably comes with risks, it was a career she encouraged.

She said: “I was very proud of Charlotte wishing to join Dyfed-Powys. As I retire I still consider that policing offers tremendous job satisfaction and I know that the organisation looks after and cares for its staff.

“I encouraged her to find out about the PCSO role before she applied, and also encouraged her to attend an open evening in Ceredigion to speak to staff. I wanted her to make an informed decision to join the organisation.

“As a parent and a former officer, it is natural to be concerned about what may occur when Charlotte is at work. However, the training, mentoring and support from staff and supervisors is second to none, so that offers me reassurance.”

Looking back at 30 years in policing, CI Carter has achieved plenty to inspire her daughter – and other women thinking of joining. From being a founding member of female networks in two forces, and a committee member of the British Association of Women in Policing, she has also proudly contributed to local and national work to ensure all staff reach their full potential.

She was humbled to receive a leadership award from Chwarae Teg in 2017, and represented chief officers at the International Association of Women Police awards in Alaska in 2019, where two Ceredigion officers were rewarded for their bravery.

When it comes to passing on her wealth of experience to her daughter, the former CI urged her to always consider her own wellbeing as well as that of the community.

“The most important advice I have given Charlotte is to look after herself and her wellbeing as whilst policing is a very rewarding role, it is one that can be both challenging and stressful at times,” she said.