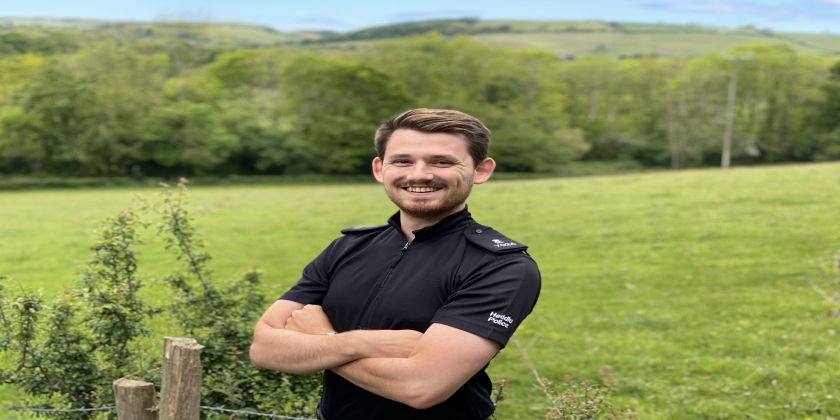 WHILE most people are staying home to stay safe, a small army of volunteers has been patrolling the streets to help protect communities.

Dyfed-Powys Police’s Special Constabulary has boosted numbers on the frontline, giving up hundreds of hours to support their regular colleagues in dealing with crime and enforcing new COVID-19 legislation.

Special Inspector Haydn Bradley-Davies is one of the 46 unpaid officers to step up during the pandemic, logging a mammoth 2,500 hours and carrying out 287 duties between them in April.

For S/Insp Bradley-Davies, 280 hours have been spent on duty since March 21 – five times the hours he would usually volunteer in a month.

Despite the added risks of patrolling and coming into contact with members of the public, he did not hesitate in offering his time. As he heads back to his regular full-time job, he’s given an insight into the challenges and rewards of being a Special during this extraordinary time.

He said: “I felt it was really important that I was helping the force out during its time of need, managing the new legislation and public order.

“When the new legislation was announced back in March, the Chief Constable sent a letter to Specials asking for assistance, and I felt it was essential that I helped out as much as I could.

“I knew the new rules would mean extra challenges for regular officers, who would be committed with road checks and additional patrols, as well as dealing with reports of crime. It was important to me to be able to do my bit to help my colleagues.”

Since March 21, S/Insp Bradley-Davies has attached himself to the Aberystwyth response code he usually volunteers alongside. When he would usually be working his desk job with the Welsh Government, he’s been responding to calls from the public, updating victims of crime on enquiries, protecting vulnerable people and implementing the new legislation.

Specials across the force have made seven arrests and assisted in 28, attended 25 domestic calls, carried out 656 vehicle stops, recorded five drug seizures and conducted 322 stop checks.

S/Insp Bradley-Davies said: “Enforcing the regulations has mainly involved educating members of the public in the Aberystwyth and North Ceredigion area of the new rules and their own responsibilities, as well as helping them understand what they should all be doing to protect themselves and others,” he said.

“This has been mainly via foot patrol in hotspots where there are likely to be more people, and also conducting static road checks to make sure people are only travelling for essential reasons.

Despite having four years of Special experience under his belt, this is the first time S/Insp Bradley-Davies has followed a shift pattern of six days on and four days off alongside his colleagues. And although he has made the most of the opportunity, he admits it hasn’t been without its challenges.

“I have worked with Code E for the majority of my specials career, so to be there with them every shift, seeing the challenges they face day to day, and to support them as much as I have was a huge pleasure,” he said.

“I’ve felt I have become so much closer to my colleagues over the past seven weeks. It’s very much like being part of a family being on shift, which has been the most enjoyable part.

“As someone who works and has always worked flexible working hours, I have found the move to a shift work pattern quite different. I’m used to the occasional night shift with my Special Constable role, but working a full pattern is challenging.

“I have enjoyed the experience, but I think it has shown me that I am not a shift person and I want to continue as a Special Constable working alongside my full time role.”

Dyfed-Powys Police currently has 88 Special Constables, who work across the force area. Many carry out the role alongside full time work and family commitments. For S/Insp Bradley-Davies and his colleagues, the opportunity to support his colleagues full time, on paid and unpaid leave, would not have been possible without the backing of their employers.

He said: “My employers at the Welsh Government have always been supportive of my role as a Special Constable and volunteering in general. Since the announcement of lockdown they have been even more supportive than normal, and allowed me to be released in order to assist Dyfed-Powys with their work.”

Special Chief Inspector Chris Evans thanked all Specials for the work they have carried out in recent weeks.

He said: “DPP Specials have been fantastic during this period. A huge thank you to them for all that they are doing.

“Thank you also to the employers of Specials who have supported their communities by allowing Specials to be on duty with the Employer Supported Policing scheme.”