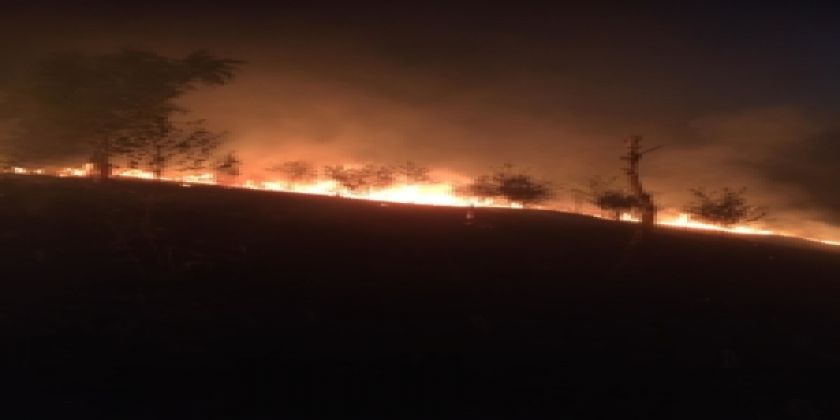 The Wildfire Team at South Wales Fire and Rescue Service have been using specialist techniques to help prevent wildfires from spreading and destroying Welsh countrysides. In recent weeks our crews have attended over 500 deliberately set wildfires, which not only put our firefighters lives in danger but can spread dangerously close to property, posing a serious risk to life.

These fires have spread to destroy many hectares of grassland, affecting wildlife and ecosystems in their path. They also cause a strain on emergency resources and require the attendance of multiple appliances and the use of critical equipment. As well as causing damage to property and the environment, the swathes of thick smoke from these fires can increase the risk to vulnerable people with medical conditions. Healthcare professionals have recently highlighted the dangers of smoke caused by wildfires to COVID-19 sufferers who may be living nearby.

To tackle this problem South Wales Fire and Rescue Service are working closely with our partners to reduce the number of deliberate fires and to minimise the risk if a fire does break out.

The Service’s Fire Crime Unit  have been working in hot spot areas carrying out prevention activities including the successful technique of cutting firebreaks into vegetation to stop fires spreading.

Alongside Natural Resources Wales, firefighters have been actively cutting these breaks primarily on paths and tracks that surround not only forestry but also near to and around residential and commercial properties. The idea of cutting onto tracks allows for a safe refuge for the public and help support the biodiversity of an area in the event of a fire. Specialist trained firefighters use a Mechanical Flail to create the breaks which proactively work to stop fires from spreading and also help to open up some previously unable to reach locations due to vegetation build up.

A recent example of this on Rudry Common in Caerphilly last week (Thursday 14th May 2020) where a deliberately set wildfire burned across ten hectares of mountainside but slowed down upon reaching a previously cut firebreak. This allowed firefighters to effectively extinguish the fire quickly, without it spreading to nearing properties and also offered wildlife an escape route.

The Fire Crime Unit are working as part of Operation Dawns Glaw, an all-Wales multi-agency task force supported by a range of partners whose aim is to reduce the uncontrolled environmental destruction and potential threat to lives and property arising from deliberately set wildfires. The team are continually sharing new ideas to reduce the risk from such fires and are continuing to map locations which would benefit from firebreaks and other techniques in a bid to reduce the harm associated with wildfires. Before cutting the breaks the team conduct site surveys, and look to prevent interference with birds nesting and other habiting wildlife before any cutting commences.

Sadly many of the fires are started deliberately and are drawing valuable resources away from our communities, placing an unnecessary risk on lives.

We would urge anyone who has information on suspected deliberate fires, or who sees anything suspicious to contact 101, or call Crimestoppers anonymously on 0800 555 111. If you see a fire, or anyone starting a fire, please call 999 immediately.