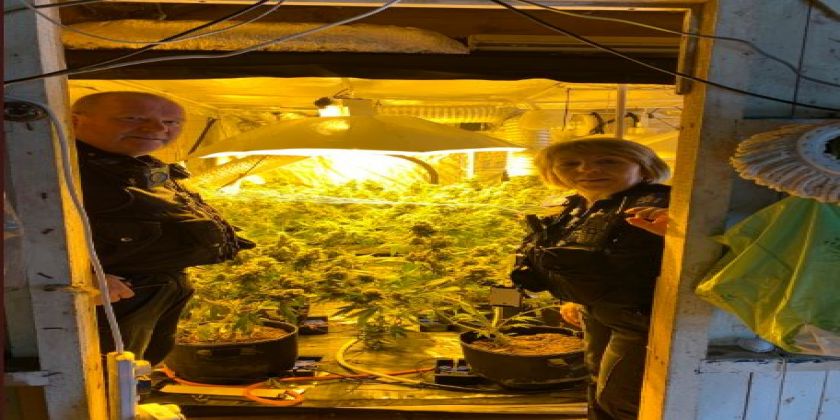 Police uncovered a cannabis factory with plants worth around £20,000 in a Carmarthenshire village as the fifth in a series of warrants was carried out.

Dyfed-Powys Police also recovered two quad bikes and an off-road motorbike, which are all suspected of being stolen, when a warrant was executed near Carmarthen.

Officers entered the house at around 9.30am yesterday (Thursday, May 21), acting on information that there was a cannabis cultivation at the property.

They seized 16 mature cannabis plants, 20 cannabis saplings, over 450g of herbal cannabis in tubs, and approximately 2.9g of brown powder which is suspected to be heroin.

The cannabis is estimated to have a street value of £20,000.

Officers also recovered two Kawasaki 300 quad bikes and a Honda off-road motorbike, all of which had their serial numbers removed.

Two people – a man and woman in their 40s – were arrested on suspicion of the production and possession of controlled substances, and theft. They have been released under investigation pending further enquiries.

Rural crime officers with a quad bike suspected to be stolen

This was the fifth warrant executed in and around Carmarthen this week, as teams crack down on the supply of drugs in the area.

Last weekend (May 14-17), officers carried out targeted patrols in the town as a result of concerns raised by the community, and intelligence gathered.

This resulted in six people being dealt with for possession of cannabis, and a man arrested on suspicion of possession with intent to supply the class B drug. He was interviewed and released under investigation pending further enquiries.

On Saturday, March 16, warrants were carried out at Maes-yr-Ysgol and Merlin Street, where cannabis was found. Three people will be dealt with for possession offences.

On Tuesday, May 19, two further warrants were executed at homes in Park Hall and Sycamore Way, where two people were dealt with for class B offences.

Inspector Justin Ellerton said: “Officers from various teams across the Carmarthenshire division have worked together to target the supply of drugs in the area – and in particular, Carmarthen town, this week.

“It has been very successful, with drugs seized before they could make it into the community, and criminal behaviour disrupted.

“After each warrant, the Neighbourhood Policing Team explained to people in the area what we were doing, and asked if there were any concerns. Our actions were positively received.

“As a result of patrols and the warrants, officers have gained further intelligence around the active supply of drugs in Carmarthen, as well as information relevant to two separate operations, which will be followed up.”