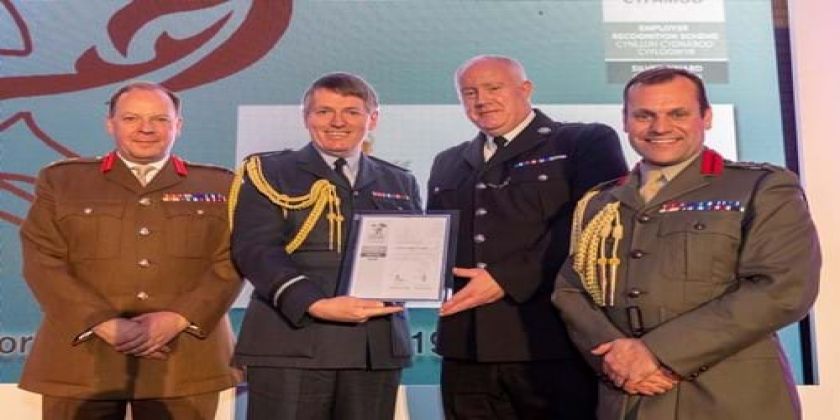 North Wales Police received the Silver Award in recognition for our support for the Armed Forces through our Employee Recognition Scheme.

As we mark Armed Forces week we are highlighting the efforts we make to support defence personnel by employing reservists and veterans, while encouraging others to do the same.

Chief Inspector Jeff Moses who has served in the Army Reserve for 28 years, said; “The Silver  Award demonstrates our commitment to the Armed Forces Covenant . It recognises that we actively communicate and uphold a positive stance to our employees, officers and staff and show flexibility towards annual training and mobilisation commitments of Reservists.

“We also support the employment of Cadet Instructors and Armed Forces Veterans, including the wounded, injured and sick, and military spouses and partners.

“The award is a tribute to North Wales Police as an employer and recognises our support to our colleagues in the Armed Forces. We are now aiming for the Gold Award by further demonstrating our commitment to employees and the wider community through our developing established policies.”

Saturday 27 June will be the twelfth annual Armed Forces Day and the first to be marked virtually. As many events have been cancelled due to the coronavirus outbreak, AFD will be celebrated on social media channels  with the public being encouraged to show their support from their homes