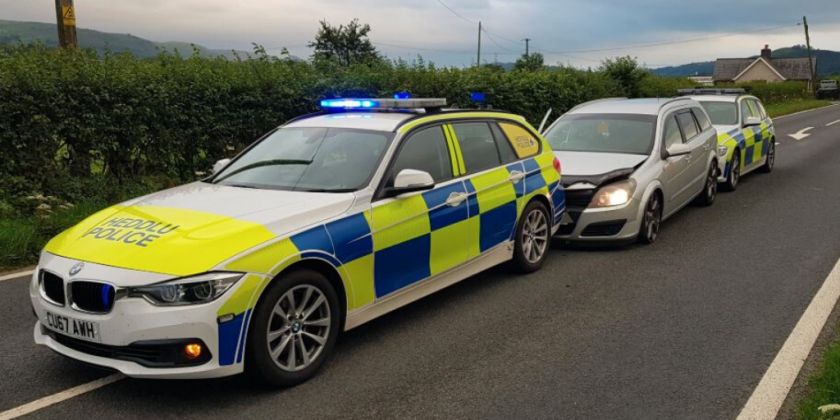 Two men were arrested after driving over 100mph and on the wrong side of the road during a 10-mile police pursuit.

Two Dyfed-Powys Police cars were damaged by the Vauxhall Astra on July 15, after the driver carried on despite a stinger being deployed.

With smoke coming from the tyres, and the driver still breaking the speed limit, officers had no option but to bring it to a stop.

Newtown roads policing Sergeant Rob Hamer said: “Officers’ attention was brought to a car just outside Aberystwyth, which was driving at excess speed on the A44 and failed to stop when requested.

“Two men were reported to be in the car, and North Powys Roads Policing officers were dispatched towards to stop it.

“One of our cars passed the Astra, which was heading on the A470 towards Llanidloes, and a pursuit was authorised. The car was breaking the speed limit – hitting in excess of 100mph – and at times travelling on the wrong side of the road.

“Given the reckless behaviour of the driver, the potential for a serious collision was high.”

A stinger was deployed, however the driver continued at excess speed. Officers finally brought the car to a stop by boxing it in

PS Hamer said: “The car went over the stinger at high speed, and somehow the driver managed to carry on at 70mph before slowing slightly to 60mph. There was smoke coming from the tyres, which were falling apart at that point.

“The driver collided with one of our vehicles, and both traffic cars were damaged during the box stop.”

Two men were arrested at the scene. The 22-year-old driver was arrested on suspicion of possession of cannabis, dangerous driving, driving while unfit through drink or drugs, driving while disqualified and failing to stop for police. He has been bailed with conditions not to enter Wales.

The 29-year-old passenger has been released with no further police action.