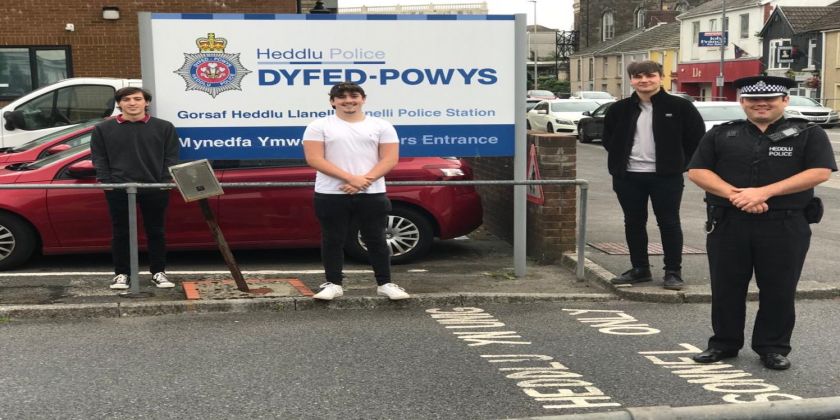 POLICE have praised the immense bravery of a Llanelli student who rushed into the sea to save a man.

Dyfed-Powys Police Superintendent Ifan Charles met with friends Tom Williams, Ciaran Phillips and Morgan Discombe-Hughes to thank them for their actions after a man got into difficulty on the water’s edge.

The nineteen-year-olds were enjoying an evening at Llanelli beach when they noticed a man walking along the rocks in a secluded area.

When he fell, hitting his head, Tom rushed over to help – pulling him out of the sea while his friends called for help.

The Bangor University Marine Biology and Oceanology student said: “We were just sitting on the beach when we saw this guy walking across the rocks. We thought it was a strange place to be walking, then all of a sudden he fell.

“I ran over to check if he was ok, and he was unconscious with his head in the water. I managed to lift him out and turn him onto his back so I could make sure he wasn’t bleeding.”

Despite Tom’s help, and the danger posed by the rising tide, within minutes the man had made his way back to the water. Remaining calm, Tom started talking to him in a bid to coax him to safety, while his friends called 999 for help.

“I managed to talk him out of the water,” said Tom, from Felinfoel. “He came and sat next to me, and I was just talking to him about normal things – anything that came to mind. I’m not sure what I was thinking, I just knew I needed to do something.

“At first he was quite frantic, and he was obviously stressed, but then his whole mindset changed. He seemed to change completely – he looked out at the sea and said how nice the view was. That’s when I knew he was ok.”

Dyfed-Powys Police, the Wales Ambulance Service, Coastguard and RNLI were dispatched to the scene, where a huge crowd had gathered to watch.

On arrival, police and Coastguard personnel helped to get the man over 20ft of rocky terrain back to the coastal path.

“I went into a state of shock immediately after,” Tom said. “I think the adrenaline wore off, and I was quite shook up for a day or two after. I got worked up just thinking about it.

“I’m ok with what happened now. I know I did the right thing, and just think it’s so lucky we were there and saw him fall.”

Dyfed-Powys Police Superintendent for Carmarthenshire Ifan Charles met with Tom and his friends after the incident to praise them for their actions.

He said: “There’s no doubt that this group of friends saved a man’s life, and I would like to offer my sincere thanks for their help on that evening.

“Tom’s bravery in running to help without hesitation, and Ciaran and Morgan’s swift call to the emergency services, deserve the utmost praise.

“It can’t have been an easy thing to do, but all three should be incredibly proud of their selfless actions.”