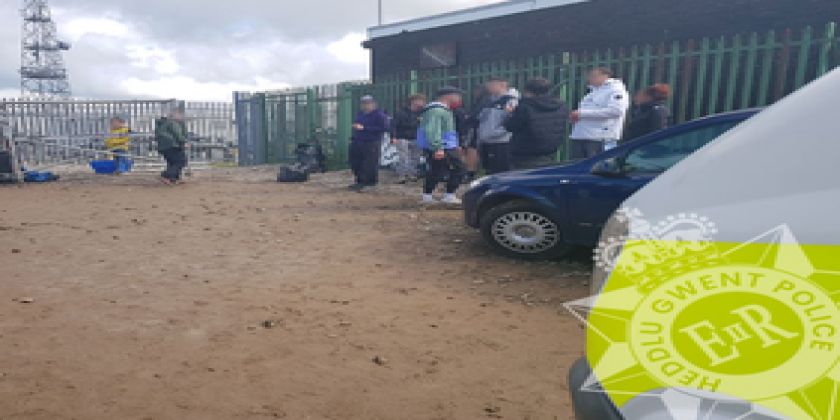 Gwent Police is asking residents to report unusual activity associated with raves, such as large convoys of vehicles near abandoned buildings or private land late at night, to the force after breaking up two events last weekend.

A rave, known also as an unlicensed music event, refers to a large group of people setting up a music system at a location to play loud music for an extended period of time.

Often occurring on private land and late at night, raves can cause serious disruption to nearby residents due to the loud music, while events can frequently be linked to further offences such as anti-social behaviour, criminal damage and substance misuse.

Officers received a report of an unlicensed music event on Mynydd Maen, near Abercarn, at around 6.40am on Sunday 19 July, where around 20 people were in attendance.

A 27-year-old man from the Ebbw Vale area was arrested on suspicion of possession of a controlled drug of class B, while musical equipment and five vehicles were seized by officers. He received a caution for the possession offence.

Officers also attended an unlicensed music event on private land in Hollybush, near Tredegar, on Saturday 18 July, bringing the rave to a conclusion by negotiating with the event organiser. No arrests were made nor items seized.

In line with existing powers and to ensure the safety to those attending an unlicensed music event and those in the vicinity, officers can close the event to prevent any escalation, seize equipment and prosecute organisers.

“It is a common misconception that legal raves exist. Every single event of this type is illegal and therefore prohibited at any time of the year.

“This is not the case of the police wishing to stop people enjoying themselves; arranging an unlicensed music event is an offence and officers also have powers to seize equipment.

“As we continue to move forward and lockdown restrictions ease gradually, we continue to ask our communities follow the Welsh Government guidance, stay safe and be mindful of the current rules in place.

“Officers will be out and about on patrol across all force areas to protect and reassure our communities.”

There are several common signs that indicates a rave may be taking place.

These include: an unusual increase in road traffic; vehicles carrying sound equipment and large gatherings people late at night near to warehouses, open areas or abandoned buildings.

You may also notice social media activity advertising that a rave is due to take place and its suggested location.

If you notice any of these signs, or any other unusual activity, please notify us as soon as possible by calling 101, 999 in an emergency, or Crimestoppers anonymously on 0800 555 111.

Anyone who wishes to hold a music event should obtain a regulated entertainment licence from their local authority.

Signs that a rave may be taking place include:

• Posters or messages on social media advertising a ‘rave’,
• Locks and chains on fields and private land being cut or tampered with,
• Unusual traffic activity - i.e. large convoys of cars on quieter/rural roads,
• Sound equipment and marquees or tents being set up,
• Power generators being hired and bought onto land/rural locations,
• Flattened or disturbed hedgerows,
• Loud music and sound checks in locations where this would not be expected.