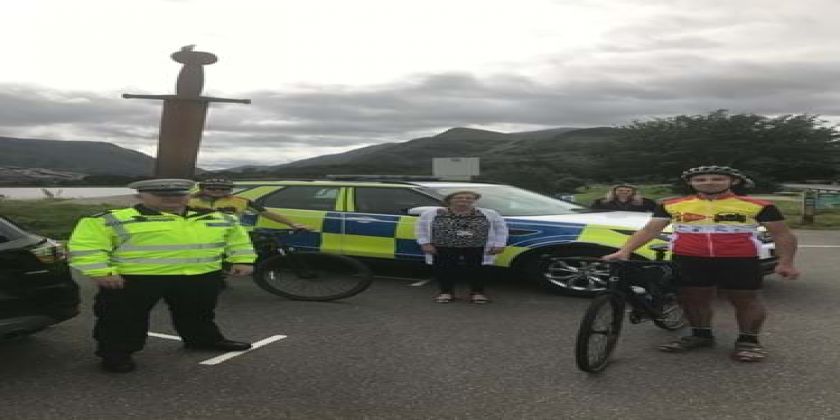 Specialist gilets are to be given to vulnerable cyclists thanks to the latest road safety initiative by North Wales Police, the six local authorities and the Welsh Government’s Traffic Wales service.

The bright and colourful gilets will be distributed by officers from the Roads Policing Unit to cyclists who are spotted out and about wearing dark clothing. The back of the gilets also display the 1.5 metre logo – the distance required for when passing a cyclist safely at 30mph.

The Safer Cycling campaign has been launched due to an increase in the number of cyclists who are now using the region’s roads.

Sergeant Trystan Bevan of the Roads Policing Unit said: “Since the coronavirus lockdown, we have seen an increase in the number of people using our roads for cycling. Now more than ever, we urge motorists to give cyclists, and other vulnerable road users, especially children, plenty of space.

“During the lockdown it was noted by patrolling officers that a number of cyclists were wearing dark clothing making them less visible to other road users.

“Cyclists have a responsibility to ride in an appropriate manner and take measures to ensure they are as visible as possible to vehicles and other road users. However due to the increase in the number of cyclists taking to the roads, some may be better equipped than others, so the gilets will be handed over to the less visible.

“The gilets also highlight the 1.5 metre logo which is aimed at educating road users into providing a safe passing distance to cyclists when overtaking.

Sgt Bevan added: “During the summer, we usually see cyclist casualties increase, but the majority of collisions are preventable. If everyone was a little more cautious and alert, slowed down and gave each other space, a lot of collisions could be avoided.

“Drivers are not knowingly putting cyclists at risk, but perhaps they’re not looking for them, or maybe they are unaware of the dangers of close pass overtaking. So we are asking all road-users to look out for each other and to help safeguard cyclists.”

Thanks to a partnership approach North Wales Police worked closely with cycling specialists Velotec Ltd – who designed and produced a specialist product that would be used by cyclists.

Sergeant Bevan added: “There is room for everyone and we encourage all road users to show consideration and respect for the safety of each other. We all have a duty to make our roads a safer place."

Colleagues from the Welsh Government’s Traffic Wales service have seen between a threefold and fourfold increase in cycling in some areas on the trunk road network within Wales during lockdown,

They recognise that the trunk road network plays an important role in supporting the needs of cyclists in Wales and this can be achieved by working in partnership to promote schemes such as this one which reinforce safety messages for all road users and by creating routes that are attractive, safe and separate from traffic to encourage people of all abilities to cycle.

Councillor Gareth Griffith, Gwynedd Council Cabinet Member for Environment said: “We are pleased to support this important road safety campaign which will benefit all road users.

“More people have been out on their bikes making the most of the quieter roads during lockdown, but with traffic slowly increasing, Gwynedd Council is eager to ensure that cyclists continue get the respect and space they deserve on our roads.

“As part of this work, Gwynedd Council recently launched new signage along a number of popular mountain passes in Snowdonia to remind drivers of the minimum space needed to ensure safety when passing a cyclist. The first of their kind in the UK, the road signs urge motorists to give cyclists 1.5 metres.”