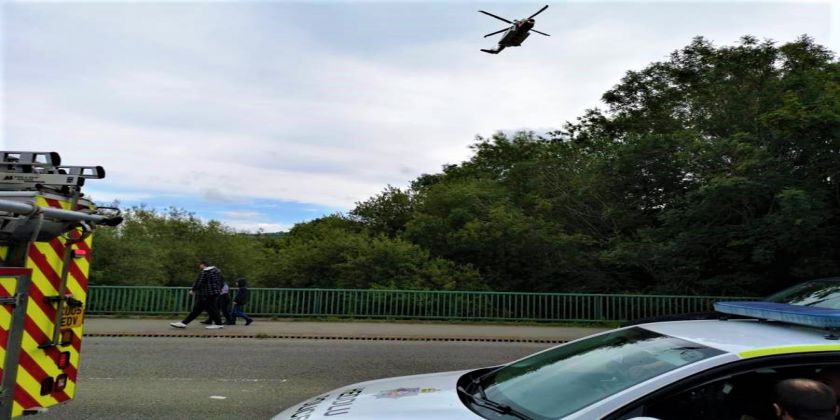 Wild swimmers are urged to ‘think first’ following a huge emergency services operation to rescue a mother and child from a river in Ceredigion.

The dangers of swimming in open water have been highlighted after a multi-agency rescue took place in Aberystwyth when a nine-year-old boy was washed away and his mother tried to save him.

Thanks to the efforts of Dyfed-Powys Police, Mid and West Wales Fire and Rescue Service, Coastguard, RNLI, Wales Ambulance Service, Wales Air Ambulance and a military helicopter, the mother and son were found before they could come to harm.

A joint safety message has now been issued, asking people to take precautions before swimming in rivers or the sea as there could be hidden dangers.

Dyfed-Powys Police Inspector Delme Rees was on duty in Aberystwyth when the force received a call from Coastguard on the afternoon of July 22 asking for assistance.

“It was one of those calls where your heart sinks,” he said. “Coastguard were attending the bridge over the River Rheidol as a nine-year-old had been washed downstream while swimming with family, and had gone out of sight.

“The river runs behind Aberystwyth Police Station, and we could see the water was quite high and flowing quickly.

“We immediately deployed all our response officers, Neighbourhood Policing teams, CID and scenes of crime officers to the area the family had been swimming in, as well as the three bridges spanning the Rheidol to try and find the little boy.”

Colleagues from all emergency services covered the banks of the river in a desperate attempt to find the missing child.

Police officers could not find anyone in distress, and the person who made the original 999 call was no longer contactable. Concern was heightened as response teams learned the mother had entered the water after her son, and was also unaccounted for.

“It was turning into the worst possible scenario,” said Insp Rees. “We were faced with a mother and son in trouble in the water, and within minutes realised the father was also missing.

“There were police, fire officers and Coastguard personnel trawling the water and riverbanks. Looking up at the sky, it was like a scene reminiscent of Apocalypse Now as we were joined by a military Chinook helicopter which was in the area, along with the air ambulance and Coastguard helicopter.

“It was all hands on deck as we did all we could to find the little boy and his parents.”

Thanks to the redeployment of fire service personnel to a location further upstream, the mother and son were found among undergrowth by water rescue officers who were searching the river.

The location was not visible to those on the bank, and while the pair was fortunate in being able to secure themselves away from the current, they were unable to get themselves out of the water due to the high bank and vegetation.

Insp Rees said: “Mid and West Wales Fire and Rescue service utilised specialist teams and equipment to bring them back across the river and get them out from a lower bank. This took around 45 minutes due to the flow and depth of the river, before they were handed over to the waiting ambulance.

“Thankfully, contact was made with the father of the child during this time, and he made his way to the extraction point.”

Both mother and son were checked over at hospital as a precaution, and while they were shaken up, they did not suffer any injuries or medical conditions as a result of the incident.

The operation serves as a reminder of the dangers of wild swimming, and people are being urged to take care before entering rivers or the sea.

Dyfed-Powys Police is working with the local authority, Coastguard and RNLI to put signs and water safety measures in the area in a bid to reduce similar incidents in the future.

The Coastguard has offered advice to anyone planning to swim in open water over the summer, urging people to “think first”.

“It’s easy to get caught out even if you are an experienced swimmer,” a spokesman said.

“Please don't swim alone, don’t take inflatables into the sea and keep a close eye on friends and family when you visit the coast this summer.

“If you see anybody in trouble or if you get into difficulty, call 999 and ask for the Coastguard. Keep your phone on and free from calls so emergency services can get back in contact.”