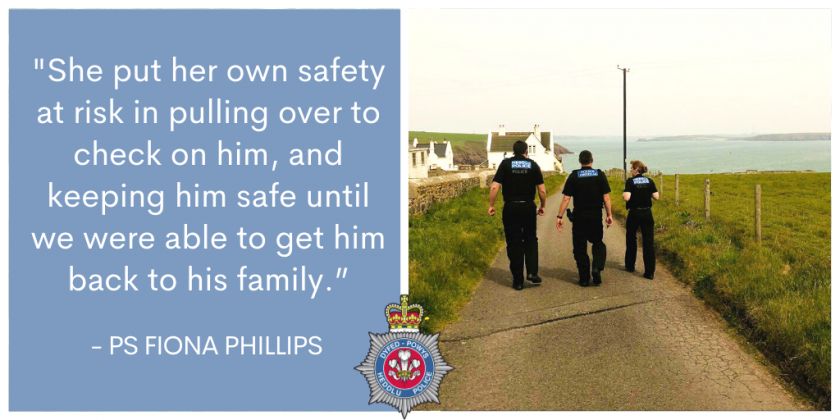 An off-duty student police officer has been praised after finding a vulnerable missing teenager on the side of a busy dual carriageway.

The Dyfed-Powys Police officer, who joined the force in January, pulled over on the A40 near St Clears after spotting a boy on the side of the road.

Concerned for his welfare – and unaware there was a huge search underway to find him – she put her own safety at risk to ensure he was ok.

Sergeant Fiona Phillips, who led the search, explained that the initial missing person report came in to police at just after 2pm on Sunday, September 13.

“The family was here on holiday for the weekend, when the boy went outside and just vanished,” she said.

“He was reported missing to us around two hours after he was last seen, and had never been to the area before.

“He didn’t have a mobile phone, and there was no way of guessing which direction he might have gone in.

“It was like searching for a needle in a haystack.”

A search was immediately launched, with teams from across Carmarthenshire called in to help.

Sgt Phillips said: “We had officers from across the division supporting the search, and a request in with NPAS (National Police Air Support) for a helicopter as he had a lead time of two hours on us, three dog units and Coastguard.

“We were just trying to cover as much ground as possible, with the hope of finding him quickly and safely.”

As the search effort continued, the force control centre received a call from an off-duty student officer, who had come across a teenager on the side of the A40.

“It was an off-duty officer who was driving near St Clears and noticed someone on the side of the road,” Sgt Phillips said.

“She could see he was young, and was concerned about him being so close to the dual carriageway, so she pulled over to see if he was ok.

“She spoke to him and couldn’t tell her why he was there.

“She called it in to the control room at 2.55pm, and the connection was made with our missing person.”

Contact was immediately made with the boy’s family, letting them know he had been found safe and well a substantive distance away.

“The sense of relief among the search team was huge,” Sgt Phillips said.

“This could have ended up being a huge search considering the distance he had managed to walk – and I have no doubt it would have continued well into the night.

“The officer who found him did an amazing job – she put her own safety at risk in pulling over to check on him, and keeping him safe until we were able to get him back to his family.

“She has truly proved her care for the public, and I would like to personally commend her for her quick-thinking in preventing him from coming to any harm, as well as all the officers involved in locating the boy quickly.”