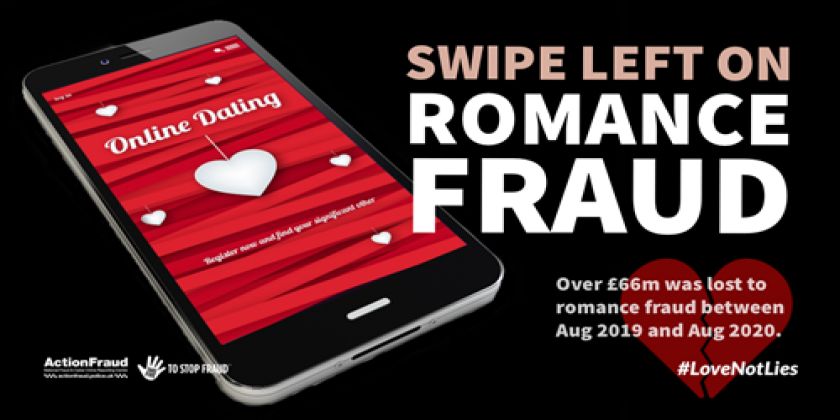 Police forces across the country are working together with partners, including Match Group, to tackle romance fraud, with a combination of awareness raising and enforcement activity, co-ordinated by the City of London Police (CoLP).

The multi-agency campaign, running throughout October, aims to raise awareness of romance fraud and provide clear and unambiguous protection advice to the public, following a 26 percent rise in reports to Action Fraud in the last year.

T/Detective Chief Superintendent Alex Rothwell, from the City of London Police, said: “Romance fraud is a devastating crime that impacts victims both financially and emotionally. It is a crime that we in policing across the UK, are committed to tackling with help from key partners. Through this campaign we want to empower people to understand what to look out for and feel confident that if they have fallen victim to a fraud, to report it to us.
“Criminals are experts at impersonating people. They spend hours researching you for their scams, especially when committing romance fraud. We’re reminding everyone to stop and think: fall for the person, not the profile, it could protect you and your money."

Romance fraud, or dating fraud, occurs when you think you’ve met the perfect partner online but they are using a fake profile to form a relationship with you. They gain your trust over a number of weeks or months and have you believe you are in a loving and caring relationship. However, the criminal’s end goal is only ever to get your money or personal information.

Between August 2019 and August 2020, Action Fraud received over 400 reports a month from victims of romance fraud in the UK. Losses reported by victims during this time totalled £66,335,239, equating to an average loss per victim of just over £10,000.

During June, July and August 2020, Action Fraud received more than 600 reports per month of romance fraud, indicating people may have met, and begun talking to, romance fraudsters during the national lockdown caused by the coronavirus outbreak.

Diana Fawcett, Chief Executive of the independent charity Victim Support, said: “Victims of romance fraud often blame themselves, but it is important to understand that this is an incredibly sophisticated crime, and that almost anyone can be targeted. Victims may feel they have not only lost money, but also a loving partner or relationship they thought they had.

“Lockdown restrictions meant people could not meet in person for a number of months, which led to many seeking to form new connections online. Whilst using the internet can be a great way to meet people and form relationships, there’s also a great risk of being lured into a romance scam as fraudsters know how to take advantage of people’s desire for human contact. Unfortunately, we’ve seen that circumstances caused by coronavirus were in fact used by fraudsters as a ‘hook’ to extort money. For example, some have invented lies about needing medical treatment, or urgent travel expenses to leave a country, or funds to keep afloat after a bogus job loss caused by the pandemic.

“It’s important to be aware that not everyone is who they say they are.”

As part of the campaign the Match Group, who own OK Cupid, Plenty of Fish, Tinder and Match.com, are running romance fraud protection adverts throughout October on these platforms, to inform their users how to spot the signs of a romance fraud and how to protect themselves online.

You’ve struck up a relationship with someone online and they declare their love for you quite quickly. They may even talk of marriage or other relationship milestones such as buying a house together. Many romance fraudsters say they are based abroad so will claim a big step in your relationship will be them returning to the UK to be with you. They will claim to be overseas because they work in the military or medical profession, or they’re carrying out important charity work. This helps them paint a picture of themselves as being heroic, trustworthy and reliable, and also gives them an excuse for the use of international dialling codes or poor internet connection.

Avoid giving away too many personal details when speaking online to someone you’ve never met in person, as it can lead to your identity being stolen. This includes revealing your full name, date of birth and home address - even if you’re doing it for what seems to be harmless reasons, such as your partner wants to send you flowers or a gift.

They constantly make up excuses why they can’t video chat or meet in person and they try and move your conversation off the platform that you met on.

Stay on the site’s messaging service until you meet in person. Criminals want to quickly switch to other platforms that are less regulated and have better encryption, so there’s no evidence of them asking you for money. Whatever reason you’re given to move away from the site where you met, if the other person is genuine, they will accept your decision to stay on the platform until you see each other in person.

When they ask for your financial help, it will be for a time critical emergency. The reason will be something emotive, which pulls at your heartstrings. They’ll open up to you about a problem, or something that is worrying them to appear vulnerable and make you feel sorry for them.  They may get defensive if you decline to help or make you feel guilty and responsible for the urgent emergency they claim you could have averted.

Most online platforms have a reporting tool which you can use if you suspect someone online is using pictures that don’t belong to them, you are suspicious of their behaviour, or they have asked you for money. Reporting their user profile means it can be blocked, which helps protect others.

They tell you to keep your relationship private and insist that you don’t discuss anything you talk about with your friends and family. This also includes the crisis they find themselves in that requires money. They will convince you this is part of the normal privacy that forms a healthy relationship.

No matter how long you’ve been speaking to someone online and how much you trust them, if you haven’t met them in person do not:

“We want all of the members of our community to feel safe on our apps and feel equipped to protect themselves from romance scams. We look forward to continuing this important work, both internally by continuously updating our anti-fraud technologies and externally through our partnerships with law enforcement, governments and non-profits.”

During October, the City of London Police, the national lead force for fraud, will be co-ordinating enforcement activity across the UK and overseas, to target, and ultimately arrest, criminals suspected of committing romance fraud. This follows the creation of partnerships between the City of London Police, the National Crime Agency (NCA) and their counterparts in Ghana, to help repatriate money sent to Ghanaian bank accounts from UK victims of fraud. Via the City of London Police’s National Fraud Intelligence Bureau, UK forces are now able to send intelligence referrals to the Ghanaian authorities where they have identified suspects based in Ghana or with a link to the country. Further international collaboration has also been developed with authorities in the U.S Department of Justice, Consumer Protection Branch and their Transnational Elder Fraud Strike Force.

As part of the campaign, the City of London Police are also working with money transfer companies such as Western Union and MoneyGram, to roll-out an initiative first introduced by Sussex Police, across the whole of the UK, whereby any money transfer from overseas can be blocked if it is suspected by the authorities to be the result of a romance fraud. The payee can also be prohibited from using the service, meaning they can no longer receive any payments and victims can no longer attempt to send them money. This follows close joint working between UK police forces and the finance and banking industry for a number of years, protecting victims of fraud via the Banking Protocol.