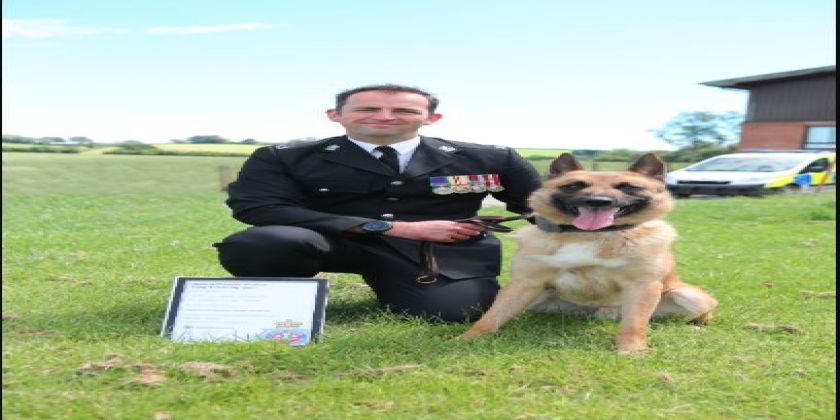 TWO police dog handlers have been commended for saving the life of a missing woman in Ceredigion.

Dyfed-Powys Police offices PC Spencer Cowper and PC Michael Barnsley gave vital first aid to the woman who was found with a severe cut to her abdomen and was losing blood rapidly.

The force had received a missing person report at around 7.15pm on Monday, November 2, and search enquiries were immediately commenced.

Chief Inspector Christina Fraser said: “An officer was sent to her home and other units dispatched to search the surrounding area, but we were facing a difficult task as we were aware she had taken her car, but we didn’t know which direction she had driven in.

“Her phone was switched off so no contact could be made with her to check that she was ok, or where she was.

“Around an hour-and-a-half after we began our search, she phoned a family member and indicated where she was.”

Fortunately, four police officers were close by, and found the missing woman in her car, unconscious, but breathing. On looking into the car, they quickly noticed blood stains on her clothes.

Ch Insp Fraser said: “Two of our dog handlers – PC Barnsley and PC Cowper – quickly lifted her out of the car and found that the source of the blood was a deep, six-inch wound on her abdomen.

“The officers’ colleagues immediately updated the ambulance service, but there was no time to lose as she was losing blood quickly.

“PCs Barnsley and Cowper started administering first aid to stem the bleeding, and there is no doubt that their actions at this point saved her life.”

Paramedics arrived at the scene at 9.20pm, and after stabilising the woman she was flown to hospital by the ambulance.

“I have to commend the commitment and professionalism of the officers at the scene, who administered first aid and liaised with ambulance control to ensure a positive outcome,” Ch Insp said.

“The officers found themselves in a very serious situation, and all worked as a team, however PC Barnsley and PC Cowper showed great diligence in persisting with first aid while the woman was in and out of consciousness, all the while reassuring her that help was on its way.”

It is understood the woman’s condition is stable.