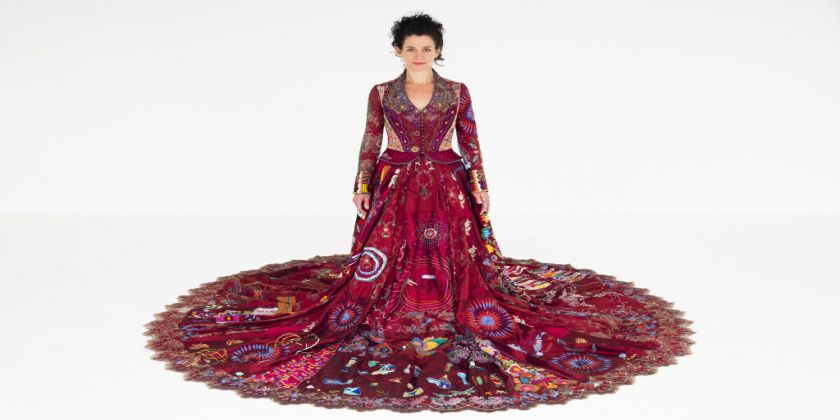 The Red Dress Project, conceived by British artist Kirstie Macleod in 2009, provides an artistic platform for women around the world, many of whom are marginalised and live in poverty, to tell their personal stories through embroidery.

During twelve years, from 2009 to 2022, pieces of the Red Dress have travelled the globe being continuously embroidered onto. Constructed out of seventy three pieces of burgundy silk dupion, the garment has been worked on by 259 women and 5 men, from 29 countries, with all 136 commissioned artisans paid for their work. The rest of the embroidery was added by 128 willing participants /audience at various groups/exhibitions/events.

Pieces were created by established and first time embroiderers. They were encouraged to tell a personal story they would like to share, expressing their own identities and adding their own cultural and traditional experience. Some chose to create using a specific style of embroidery practiced for hundreds of years in their family, village, or town.

The Red Dress has been exhibited in various galleries and museums worldwide, including Gallery Maeght in Paris, Art Dubai, Museo Des Arte Popular in Mexico City, the National Library of Kosovo, an event at the Royal Academy in London, and the Premio Valcellina Textiles award in Maniago, Italy where it won first prize in 2015.

Now it will go on show for three weeks at the National Waterfront Museum from 5 – 26 March. Sewers from Wales will be adding their own inspirational words and pictures at a special workshop to celebrate International Women’s Day on 8 March.

Amgueddfa Cymru is a family of seven museums and a collections centre, which are all free to enter thanks to the support of the Welsh Government. Together, it is home to the nation’s art, history and science collections, which will continue to grow so that they can be used and enjoyed by both present and future generations.

As a registered charity, Amgueddfa Cymru is grateful for all support. The events and exhibitions programme is supported by players of the People’s Postcode Lottery.