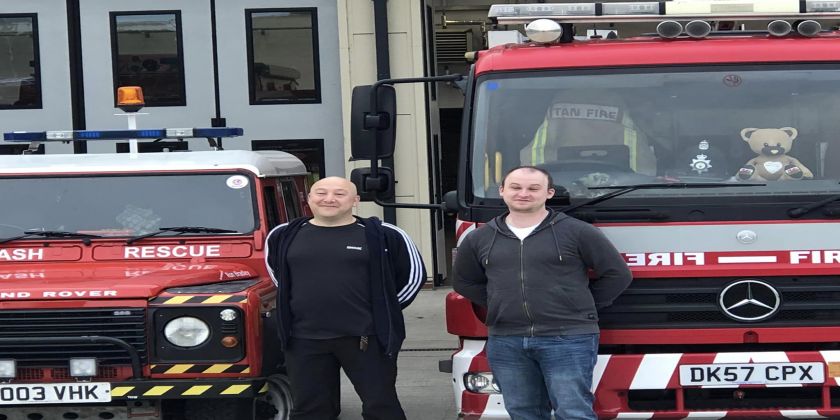 Wrexham Firefighter Daniel McNulty has undertaken an epic journey to Gambia, transporting a fire appliance donated by North Wales Fire and Rescue Service through Operation Zephyr, a charity expedition to help form an ambulance and fire service in rural Gambia.

Dan McNulty, who is also a Special Inspector for North Wales Police, started his journey with Darren Armour, Temporary Special Chief Inspector on Tuesday, September 13 – transporting the appliance as well as rescue boats and personal protective equipment donated by the Service.

They joined emergency service personnel from around the UK and Europe to travel via France and Spain through the Northwest of the African continent, all the way to the capital of The Gambia, Banjul, in order to deliver twenty five ambulances, fire engines and support vehicles, a journey of 4000 miles.

They will also be spending time providing training and familiarisation around the equipment.

Dan said: “This is a once in a lifetime opportunity to help our emergency services family from another part of the world. All they want to do is help their local communities just like we help ours. I knew straight away I needed to be involved and contribute. I have been on an amazing journey so far, showing some of the generosity of people out there, even in some of the toughest times we have faced.

“The Service has been able to donate one of our old fire appliances through Fire Aid, and I’ve driven it all the way. Whilst driving a fire engine across the Sahara Desert was a challenge, the reward was worth it!”

The levels of infant mortality in The Gambia are unacceptably high; they are one of the highest in the world and are now the highest in Africa. UNICEF state that over 1 in 20 children between one month and five years of age die, and 1 in 5 new-borns will die within the first 4 weeks of life. These figures are even higher in rural areas. The levels of infection through wounds and amputations are some of the highest in the world, with many people living with open wounds and broken bones, which the resulting infections then ultimately kill them.

The intent of Operation Zephyr is to provide functioning, decommissioned emergency vehicles, radios, equipment, uniforms and training to this emerging but very poor African nation on the west coast of Africa. Organised by the UK’s Emergency Services Aid Charity, and working with the International Police Association the operation aims to make a positive change to Gambia, and help our fellow emergency service staff give the best service they can.

Assistant Chief Fire Officer Stuart Millington, said: “This is an exciting and worthwhile project, and we’re so proud of all the work Dan has put in. We’re thrilled that we’ve been able to donate equipment through Fire Aid who in turn have been able to support Dan to help protect those in need.”

Whilst they’ve already raised an amazing £2,500; Dan and Darren are asking for any support or donations you are able to give to help them reach their target of £5000 required to help fund this much needed convoy.

This can be done through the just giving page link below:

Fundraiser by Darren Armour : Ambulances to The Gambia (gofundme.com)