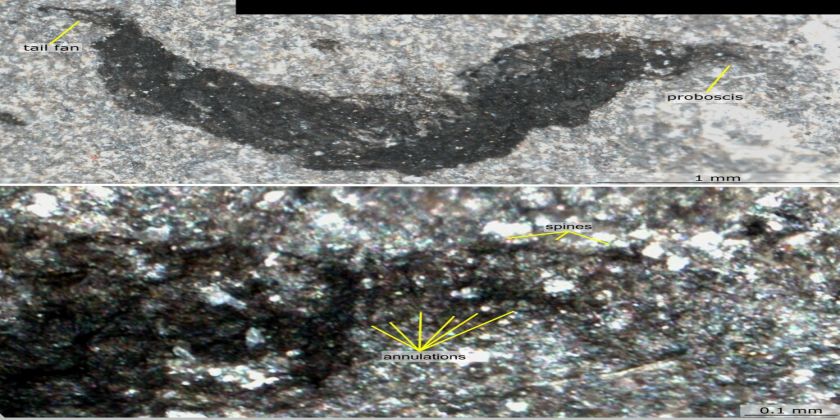 The specimens are believed to either be the first species of opabinid to be found in Europe, or to represent a distinct group of animals key to understanding the evolution of arthropods (the group of animals including crabs and insects that have exoskeletons and lots of jointed legs).

In an article published today in the journal Nature Communications, the two new specimens are described from a new fossil deposit recording life in the Ordovician Period, 40 million years after the Cambrian explosion (when all major groups of animals appeared in the fossil record over a geologically relatively short period of time). This deposit, located in a sheep field near Llandrindod Wells, was discovered during the COVID-19 lockdowns by independent researchers and Llandrindod residents Dr Joseph Botting and Dr Lucy Muir, Honorary Research Fellows at Amgueddfa Cymru.

The fossils are tiny, entirely soft-bodied animals that resemble a bizarre creature called Opabinia, which lived in Canada over 40 million years earlier.  A similar animal called Utaurora was described from rocks of a comparable age in the USA.

Opabiniids lived in the sea and were soft-bodied, with a long narrow trunk which had a row of flaps along each side, thought to have been used for swimming, and pairs of stumpy triangular legs on the underside.  At one end of the trunk, there was a fan-like tail.

Their most distinctive feature was at the other end - a long proboscis sticking out the front of the head, looking a bit like the hose of a vacuum cleaner.  In contrast to the Cambrian opabiniids, the proboscis of the Welsh species bears a row of small spines.  The proboscis is thought to have been flexible, perhaps used to pick up bits of food off the seabed and to move them to the mouth, which lay behind it on the underside of the head.

The larger of the two fossils is 13 mm long, including a 3 mm long proboscis.  The smaller one is just 3 mm, with its proboscis making up just under a third of its total length.

One of the new fossil animals has been given the scientific name Mieridduryn bonniae.  (All species, living or extinct, have a scientific name made up of two parts, a genus name and a species name).  The species name is after Bonnie, niece of the owners of the land where the fossil was found, in recognition of the family’s support and enthusiasm for the work being carried out on the fossils.  The genus name comes from the Welsh words ‘mieri’, meaning ‘bramble’,  and ‘duryn’, meaning ‘snout’ or ‘proboscis’.  It was inspired by the small thorn-like spines that stick out along the length of the animal’s proboscis.

“This is a fantastic discovery by our researchers. Joe and Lucy are working with other paleontologists from around the world to study the fossils and decipher what they can tell us about life in Wales’ seas over 460 million years ago.

“Whether the Welsh fossils represent true cousins that belong in the same family as the North American creatures is uncertain, but they certainly reveal that strange ‘opabiniid’- like animals lived in the seas for much longer than previously thought and had a wider geographical range. We look forward to finding out more about these Welsh wonders.”